Home » Book Reviews » Punta Arenas: Did you know of the Chilean town where a Sindhi man set up a business outpost in 1905? 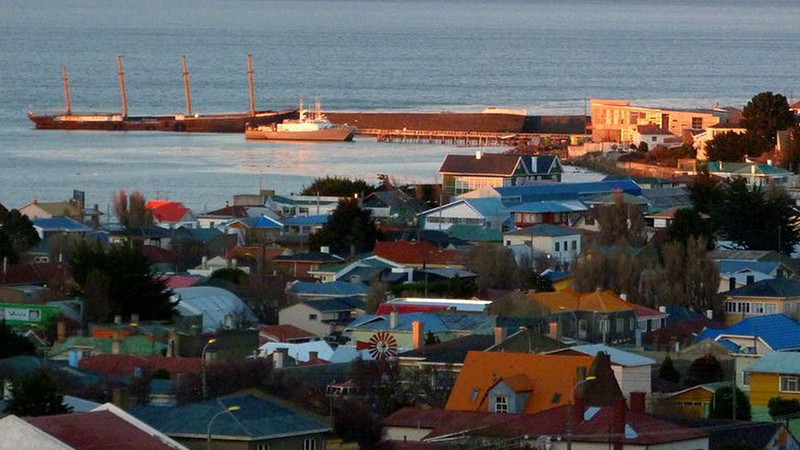 Punta Arenas: Did you know of the Chilean town where a Sindhi man set up a business outpost in 1905?

[An excerpt from Nandita Haksar’s book on travels around Antarctica.]

The flight from Santiago to Punta Arenas takes nearly four hours. Because of the uncertain weather conditions all the flights take off early in the morning so that if there are any delays we can still be in time to board the ship by late afternoon.

December 4, 2017, was a sunny day with clear skies so we landed in Punta Arenas in time to take the three hour tour of the city, which is also included in the ticket.

In the mid-19th century, Chile used Punta Arenas as a penal colony and a disciplinary posting for military personnel with “problematic” behavior. It also settled immigrants there.
In December 1851, a prisoners’ mutiny led by Lieutenant Cambiaso resulted in the murder of the Governor and a priest, and the destruction of the church and the hospital. In 1877 there was another mutiny, known as El motín de los artilleros (Mutiny of the Artillerymen), which led to the destruction of a large part of the town and the murder of many civilians not directly associated with the prison.

In time the city was restored. The growth of the sheep farming industry and the discovery of gold, as well as increasing trade via sailing ships, attracted many new settlers, and the town began to prosper.

Apparently, the city was called Sandy Point by the English but the Chileans officially renamed it Magallanes in 1927 in honour of Ferdinand Magellan (1480-1521) the Portuguese explorer. But in 1938 it was changed back to Punta Arenas. The city is the capital of Chile’s southernmost region.

The Punta Arenas harbour, although exposed to storms, was considered one of the most important in Chile before the construction of the Panama Canal. It was used as a coaling station by the steamships transiting between the Atlantic and Pacific oceans. Today it is mostly used by tourism cruises and scientific expeditions.

Punta Arenas is the largest city south of the 46th parallel south. From 1977 Punta Arenas has been one of only two free ports in Chile; Punta Arenas itself is not a “free port”, but, rather, outside the city, there is a small “zona franca” where certain products can be imported into the country under a reduced-tax regimen.

As we drove into Punta Arenas I was surprised by the broad roads, the parks and beautiful avenues. It felt like a city in Europe. Our guide told us that Punta Arenas was populated by many colonists from Spain and Croatia in the mid-nineteenth century and many of their descendants still live there. Other national ethnic groups represented are German, English, Italian, Swiss, and Irish. He did not mention the Indians who also came to Punta Arenas and made it their home.

I had read about the Indians in Punta Arenas on the website of the Indian Embassy in Santiago:
“The first person of Indian origin, a Sindhi, Bhai Haroomal, reached Chile in 1905 along with three other friends. They were in a trip from Las Palmas. Being an adventurous Sindhi, Bhai Haroomal remained in Punta Arenas in spite of the cold climatic conditions which reach minus 20 degrees Celsius. He established a very successful business with a chain of 17 stores including in Patagonia (now a part of Argentina) and Falkland Islands (Islas Malvinas). In 1907 he hired Bhai Bhojrajmal Nandwani to assist him in the day to day management of his business enterprises.

“In 1906, another reputed Sindhi company JT Chanrai established their branch in Punta Arenas which was closed down after a few years. Bhai Haroomal died in 1911. His son refused to stay in Punta Arenas and the business was sold to Bhai Bhojrajmal Hotchand Nandwani who established the company B Hotchand which was later named Nandwani Hermanos. This business is presently being handled by his son Dwarkadas, who built a temple and cultural centre in Punta Arenas, to propagate Indian culture. Today the Nandwani families are still happily settled in Punta Arenas His other sons Premchand and Atalram are presently in the Free Zone of Iquique.

“In the year 1920, Bhai Tarachand Devandas arrived in Punta Arenas. His son Mario, presently in Santiago, was the first Indian to graduate from a University in Chile. Amongst other noted Sindhis who came to Punta Arenas was Bhai Nenumal Bassarmal, famous for his store La Princessa.

“Mr Tulsi Mohinani, an outstanding philanthropist and one of the earlier settlers in Chile, has set up a Student Scholarship Fund to provide financial aid to deserving students of Indian and Chilean origin to achieve their goals in attaining University education and a Degree. Mr Tulsi Mohinani has worked tirelessly in his aim of providing a sound education to many youngsters here and his work is very much appreciated by the Indian and local community as well as the Indian Embassy in Santiago.

The number of Indian nationals and persons of Indian origin in Chile is about 1500, mostly from the Sindhi community, with a few Punjabis. About 40% of them have obtained Chilean nationality. Half of them live in the northern free port of Iquique and the rest are in Santiago and Punta Arenas.”