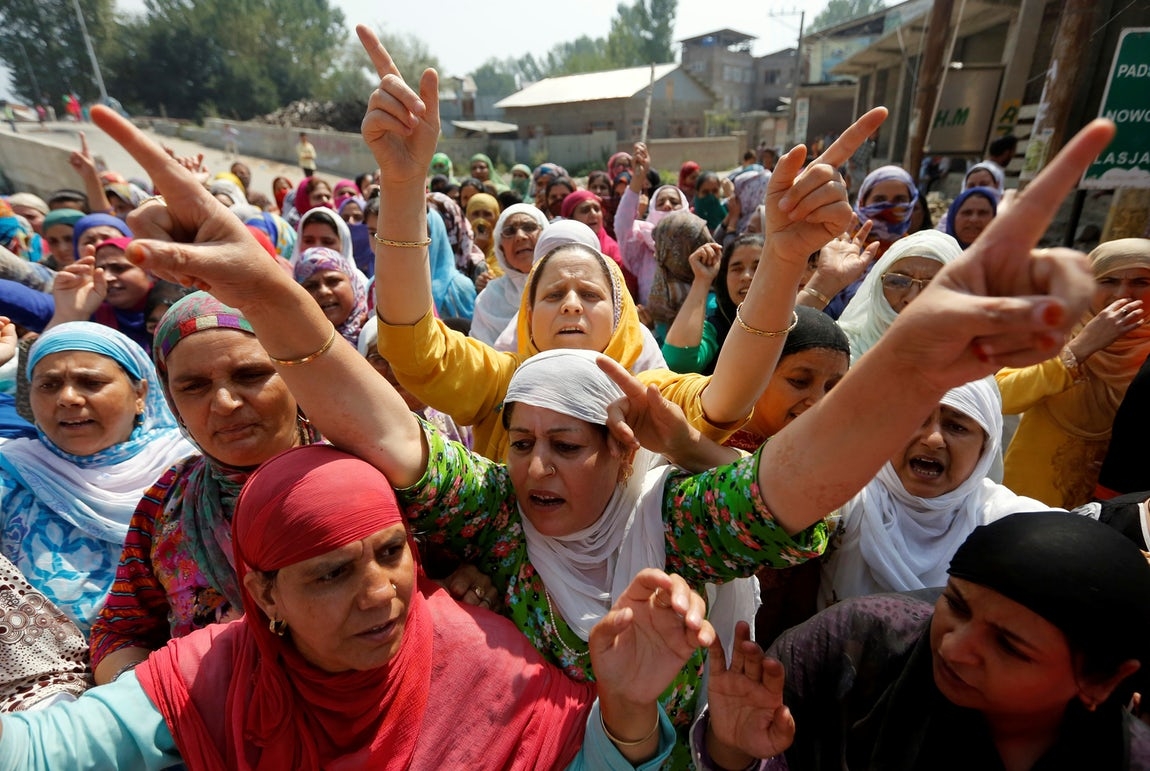 Behold, I Shine: Narratives of Kashmir’s Women and Children

For most of us growing up in the 90s, Kashmir has always been a solemn headline on the news. As time passed and I acquired more information, the perception of the ravaged state transformed into that of a paradise lost. A beautiful place which perhaps I would never get to visit. A place where the army and militants are a way of life.

But a few days back, I stumbled upon this photograph of a bunch of schoolgirls - they couldn't have been more than 15 or 16 - pelting stones at the Indian Army in a newly unsettled Kashmir. The unbridled rage evident in the picture made me stop and look at it again. And it’s just then that I got my hands on Freny Manecksha’s just-released book Behold, I Shine; Narratives of Kashmir’s Women and Children.

The importance of the book can’t be emphasised enough. What we see, hear or read about Kashmir - whether about the militants or the Army - is essentially male-centric. But there’s little documentation of how the women have suffered - bereft of family, means of survival and even personal space - over the endless decades of strife.

Manecksha, an independent journalist, has travelled across the state to talk to scores of women whose very fabric of life has unravelled under the clawing politics of their land. And Behold, I Shine not only gives them voice, but offers a clear-eyed view of the Kashmir problem without an iota of sentimentality.

My primary reaction to the book was that of anguish - however insincere it sounds vis-a-vis the secure cocoon of my life. It’s perhaps Manecksha’s impartial reportage style that makes the stories so hard-hitting.

Even days after finishing the book, I can’t brush away many of the images in my head - a 10-year-old losing half his palm from a grenade explosion while playing in the field; a soldier reading out a 15-year-old girl’s hidden love letters to the village head; half-eaten food dribbling down a little boy’s mouth as he lies dying of bullet wounds along with his father and brother; a 17-year-old with speech impediment, who couldn’t answer questions quickly enough, picked up by National Security Guard Personnel and never seen again. His mother, Parveena Ahangar - the Iron Lady of Kashmir - heard 26 years later through second-hand accounts of how the boy was stripped, “that he was calling out for me and that he desperately wanted a glass of water”.

Not to mention the interminable rapes, “encounter” deaths, the missing, the half widows, and the mentally and emotionally scarred women and children. Manecksha details their stories meticulously with the zeal of a chronicler who understands the need to tell them.
The book has been divided into neat sections, tracing and documenting the stories of Kashmir’s women, and through them the evolution of the state’s crisis. At one level, it’s heart-rending, and on the other, what shines through, without the aid of any celebratory epithets, is how the women have - and are - battling life’s greatest odds to emerge victorious - personally, socially and politically.

Take rape for instance. From being a taboo word and suffering the continued assault of family and society to talking about rape as a political and military weapon, is a long haul in a traditional patriarchal society. As a young woman, Ifrah Butt, says, “... we saw that this was as much about a group of women suffering, as it was about a land under occupation.” Women who are allegedly raped by the Army are now also considered martyrs.
Bringing an insight into the research as a woman, it’s interesting how Manecksha explores the role of spirituality and dress code in the lives of the women as well. What we, women in most of the other parts of the country, take for granted, acquires a different layer of meaning in the Kashmir context.

Take Mahum, a woman she interviewed, who told her about the significance of shrines in her life: “Where else can you, as a woman just sit? The mountains, the river banks, the overarching trees - all these wonderful spaces - they belong to men... Shrines on the other hand - they give me the space to just be.”

Manecksha also explores the current scenario of renewed unrest post Burhan Wani’s death in the Valley and sheds light on how millennials are actively taking to activism. Battles small and big are being won, and talking about issues like rape with male relatives - something unimaginable even a decade back - is nearly commonplace now.

The author should be commended on her obvious meticulous research. It couldn’t have been easy to interview so many violence-torn women and persuade them to talk about everything from aiding militants and Army misrule to mental illness and spirituality. It is indeed a brave publication (despite a handful of typos, especially towards the end of the book), given the blind wave of “nationalism” that’s currently gripping our country.
Behold, I Shine is as topical as it is significant. And more than anything else, it celebrates the spirit of womanhood and is a call for empathy with our fellow countrymen and women.

Behold, I Shine: Narratives of Kashmir’s Women and Children