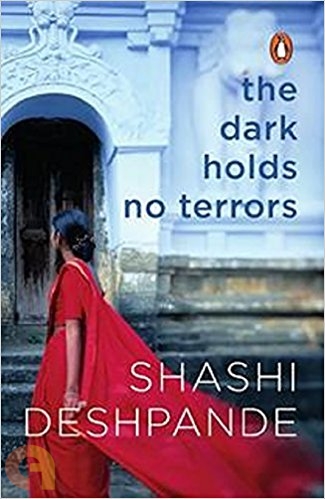 The dark holds no terrors

This is the kind of darkness that the protagonist, Sarita, of The Dark Holds No Terrors faces. The shadows of her past and the uncertainties of her present shake her own faith in herself, in her perspective of herself as an individual, as a mother, as a daughter.

Sarita was born to orthodox parents, and her mother especially was hard in her views. She wanted a son. But, her first child chanced to be a daughter, Sarita. The mother blamed Sarita for being born a girl, for being born before her time, and for being weak. She fills the child's mind with guilt at these ideas, even manages to sow enough doubts to affect the young girl’s performance at school.

Later, Sarita’s parents have a son, but an unhappy accident results in his early death. Dhruva was very attached to his sister, and he followed her wherever she went. It was when he was with her that he accidentally dies. The mother bitterly blames Sarita for her son’s death, and makes her feel guilty all the years she is with her. Sarita finishes her medical studies, falls in love with a writer, and marries him in opposition to her parent’s wishes and leaves home.

Losing touch with them for years, she returns home to visit her father on hearing of her mother’s death. Her present life is not happy either, as her husband has turned bitter because of his failure to gain recognition in his field, while his wife prospered in her profession.

The Dark Holds No Terrors explores some of the fundamental issues faced by women. Sarita’s troubles are caused by having grown up in a very conservative family, especially by having a mother who was entirely unsympathetic and narrow in her views towards her daughter.

Between these conservative confines, Sarita is left feeling confused and guilty and haunted by the darkness of her memories, and has to find a way out.