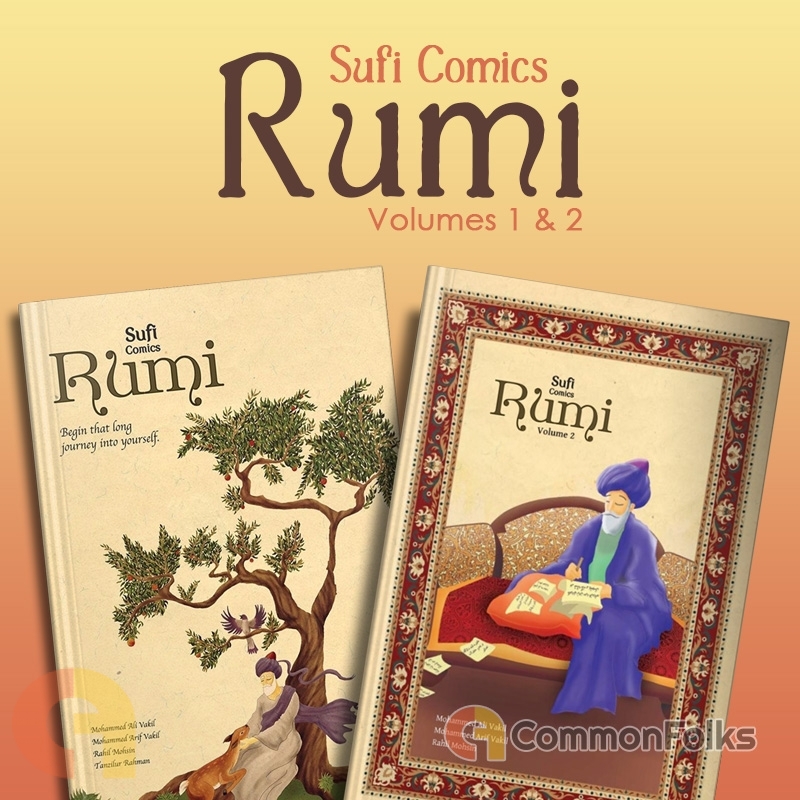 Begin that Long Journey into Yourself

Books in the Pack

Out of Stock
New

An enriching collection of Rumi’s poems in graphic form.

Mawlana Jalaluddin Rumi, a 13th century theologian, jurist and poet led a quiet life in central Anatolia, Turkey. He left a legacy of the most profound poems and stories.

It’s been 800 years since Rumi lay ink to his mystical words. Yet, even today, the spiritual wisdom that flowed from his lips, creating ripples in our hearts.

On reading his poems, one can’t help but reflect that there is more to this world than the physical and material.

The objects he refers to are so familiar, his message so universal and words so sublime, that one finds simple villagers and to university professors all quoting Rumi with fondness and fervour.

Sufi Comics - Rumi is an enriching collection of Rumi’s entrancing poems in graphic form. We’ve chosen to portray the illustrations in the Turkish-Iranian miniature style to reflect the ambiance of 13th Century Persia.

Every poem is followed by sacred verses of the Holy Quran and Islamic traditions, to reflect the inspiration of Rumi’s poems. These verses and traditions are inscribed in Arabic by Muqtar Ahmed, one of India s finest Islamic calligraphers.

We live in a world that is increasingly materialistic and devoid of the spirit. In times like these, Rumi's poems are an invitation to get in touch with your soul and experience Divine Love.

Maulana Jalaluddin Rumi, a 13th century Sufi poet, has crafted timeless wisdom in the most beautiful of poems and stories. Sufi Comics presents the second volume of Rumi's poems in graphic form. This rich visual narrative makes his message easier to understand and accessible to a wider audience. Read this book to experience Rumi, one of the world's most widely read poets, like never before.