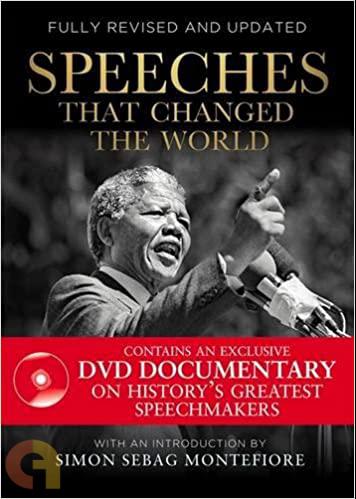 Speeches That Changed The World

From calls to arms to demands for peace, and from cries of freedom to words of inspiration, this stirring anthology captures the voices of prophets and politicians, rebels and tyrants, soldiers and statesman, placing them in historical context. With over a million copies already sold, this revised and updated edition includes speeches that have shaped the modern world: from Aung San Suu Kyi on freedom to Al Gore on the environment and from Malala Yousafzai on the education of women to Pope Francis on peace. A biography of each speechmaker reveals how they came to stand at the crossroads of history, and each speech is accompanied by an introduction explaining its historical context and how it influenced the momentous events of the day - as well as those that followed. New speeches include Malala Yousafzai's speech to the UN Youth Assembly on access to education (2013), Vladimir Putin's address regarding the annexation of Crimea (2014), Xi Jinping's Communist Party General Secretary's speech in Beijing (2012), Pope Francis's First Easter 'Urbi et Orbi' Message (2013) and Al Gore's address to the UN Bali Climate Change Conference (2007).Moving and thought-provoking, this new edition will continue to inspire and enlighten readers, offering them a fascinating perspective on historical milestones through the power of the spoken word. Contents include: Nelson Mandela, Barack Obama, Martin Luther King, Elizabeth I, Oliver Cromwell, George Washington, Napoleon Bonaparte, Abraham Lincoln, Emmeline Pankhurst, Mahatma Gandhi, Adolf Hitler, Joseph Stalin, Franklin D. Roosevelt, Charles de Gaulle, General George S. Patton, Mao Zedong, Malcolm X, Vaclav Havel, Mikhail Gorbachev, Indira Gandhi and Winston Churchill to name a few. Accompanied by a unique one-hour documentary containing 16 great speeches.