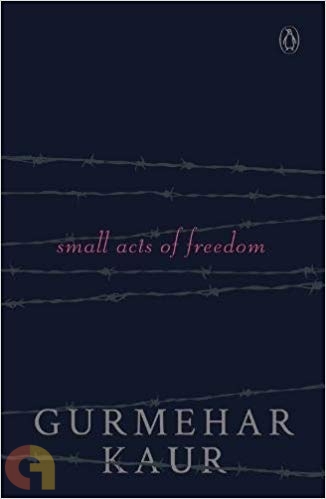 In February 2017, Gurmehar Kaur, a nineteen-year-old student, joined a peaceful campaign after violent clashes at a Delhi University college. As part of the campaign, Kaur's post made her the target of an onslaught of social media vitriol. Kaur, the daughter of a Kargil martyr, suddenly became a focal point of a nationalism debate. Facing a trial by social media, Kaur almost retreated into herself. But she was never brought up to be silenced.

‘Real bullets killed my father. Your hate bullets are deepening my resolve,’ she wrote then. Today, Kaur is doubly determined not to be silent. Small Acts of Freedom is her story. This is the story of three generations of strong, passionate single women in one family, women who have faced the world on their own terms. With an unusual narrative structure that crisscrosses elegantly between past and present, spanning seventy years from 1947 to 2017, Small Acts of Freedom is about courage.

It’s about resilience, strength and love. From her grandmother who came to India from Lahore after Partition to the whirlwind romance between her parents, from her father’s state funeral to her harrowing experiences since her days of student activism, Gurmehar Kaur’s debut is about the fierceness of love, the power of family and the little acts that beget big revolutions.