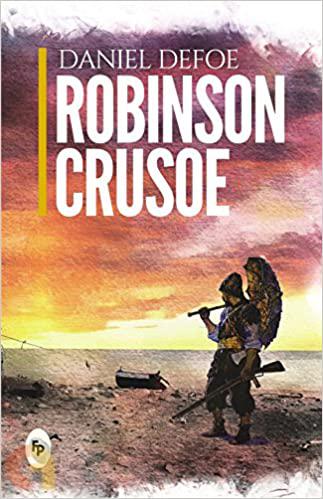 With a passion and longing for the sea, Robinson Crusoe sets on a sea voyage, much against the wishes of his family, only to survive a shipwreck. But he doesnt give up. And after a series of adventurous journeys, eight years later on the same day of September, Crusoe sets sail again. Caught in a sea storm, he is washed ashore on a deserted island after the shipwreck. The sole human survivor, along with a dog and two cats, Crusoe builds his life with whatever is available around, and begins to contemplate and consider his situation.

"Evil: I am cast upon a horrible, desolate island, void of all hope of recovery. Good: But I am alive; and not drowned, as all my ships company were."

Will his adventures end here,

or is there more in store for him?

Establishing realistic fiction as a literary genre, Daniel Defoes Robinson Crusoe is regarded as the first English novel. With simple characters and an exceptional interpretation of life, it went on to become a literary masterpiece. The novel has undergone various adaptions and continues to remain an epic.