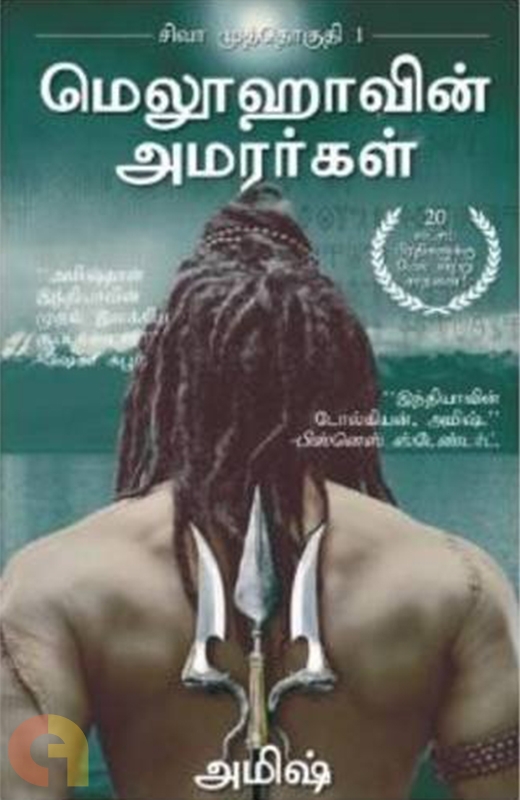 Source : The Immortals of Meluha (English)

The First book of the Shiva Trilogy

The first instalment of the Amish saga is The Immortals of Meluha. The trilogy has been converted to more than 48 languages, out of which Tamil is one such language. The Immortals of Meluha humanizes the revered Lord Shiva and describes the trials and tribulations of the human Shiva in 1900 BC, the era in Indian history which is known to be the era of the Indus Valley Civilization. The book offers a refreshingly new take on the subject and is a recreation of the story of the mythological Shiva. The story is based in the fictional land of Meluha, which was established by the great monarch Lord Rama.

The inhabitants of Meluha are in grave danger as their primary source of living, the river Saraswati, is drying up. The Suryavanshi clan, which is the major clan inhabitating Meluha, is threatened by their neighbouring enemies - 'The Chandravanshis'. The Chandravanshis have teamed up with the Nagas who are a horrific clan of people with physical deformities and mystical powers. The Suryavanshis are in need of a saviour; and they find their miraculous saviour in the form of a Tibetan immigrant, Shiva. The rest of the story follows Shiva as he exacts vengeance for the Suryavanshis, for duty and for love. The abrupt ending is a cliff hanger that leaves us thirsty for the second book. The story depicts how an ordinary man Shiva went on to be called as the great Mahadev.

Amish Tripathi was born on 18 October, 1974. He is an Indian finance veteran turned author, who is known for his trilogy - The Immortals of Meluha, The Secret of The Nagas and The Oath of The Vayuputras. He is currently invested in a project to launch the first instalment of the Ramchandra series - The Scion of Ikshvaku. The Shiva trilogy has garnered a thunderous fan-following across the world and made Amish the recipient of a number of prestigious awards. He was also selected for The Eisenhower Fellow, a prestigious programme that selects outstanding leaders from all across the world.

Amish is a 1974-born, IIM (Kolkata)-educated, boring banker turned happy author. The success of his debut book, The Immortals of Meluha (Book 1 of the Shiva Trilogy), encouraged him to give up a fourteen-year-old career in financial services to focus on writing. He is passionate about history, mythology and philosophy, finding beauty and meaning in all world religions. Amish's books have sold more than 5 million copies and have been translated into over 19 languages.