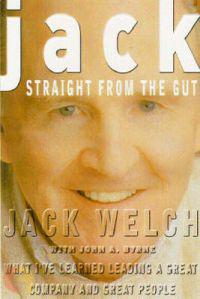 Jack : Straight From The Gut

Jack Straight From The Gut presents the success story of Jack Welch, a business legend, a self-confessed rebel, and a self-made man. Written by Welch himself, the book covers numerous aspects of his journey to the top, including his unconventional business strategies, and the people who shaped his life.

Welch started his career in 1960 as a junior chemical engineer at General Electric. In 21 years, he had risen through the ranks to assume the mantle of CEO in 1981, not without being assailed by numerous struggles and political manoeuvres over the years. At that time the company’s net worth was $12 billion.

Once Welch became the CEO, he brought about a revolution of sorts in the company’s corporate fabric. Guided by his distinctive management style, the company’s net worth ratcheted up to $280 billion in 20 years.

The book highlights several aspects of his leadership style, such as an informal, yet driven style of work, an open work culture, and individual appreciation of each of his managers. His highly personal leadership style ensured that the company thrived even during one of the most volatile phases in U.S. economic history.

Welch narrates many interesting events, including the attempt to buy Honeywell and his search for a suitable successor. The book reflects Jack Welch’s passion for his work and his sheer zest for life. It is filled with humour, candour, common sense, and many business lessons for budding managers.