Home » Books » INSIDE STORY: POLITICS, INTRIGUE AND TREACHERY FROM THATCHER TO BREXIT 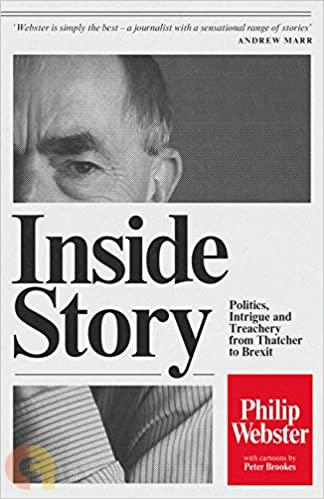 INSIDE STORY: POLITICS, INTRIGUE AND TREACHERY FROM THATCHER TO BREXIT

An insider's account of the great political stories over the past three decades years, illustrated with Peter Brookes' iconic cartoons.

With the wit and geniality that has made him so many friends in politics, Webster gives has written the verdict on the character of the senior politicians he has got to know over the decades, the much criticised Westminster Lobby system, revealing the secrets of the way political journalists operate, the future of print journalism, and the changes in politics in his marathon career.

Illustrated with cartoons from the award-winning Peter Brookes, the book includes the dramatic background to Labour's decision not to enter the Euro in 1997, the interview at Chequers in 2006 that led to the fall of Tony Blair, and the gobsmacking revelation in 2002 of John Major's affair with Edwina Currie. Unearthed is new information about the defeat of Margaret Thatcher by her party in 1990, the campaign of Major to replace her, the mystery of Michael Portillo's failed attempts to become Tory leader, the election of David Cameron, and the way he played the Coalition with Nick Clegg to his benefit.

He reveals more about Brexit, betrayals within Cameron's government, the long running feud between Tony Blair and Gordon Brown, the reasons behind David Miliband's inability to beat his brother for the Labour leadership, the efforts to oust Brown and then Ed Miliband, the drama of Miliband's last day as Labour leader and the shock election of Jeremy Corbyn.

It is the book that politicians and journalists have been waiting for. But it is one that will give readers explosive new insights on the way the stories they read at breakfast time emerge into the daylight.