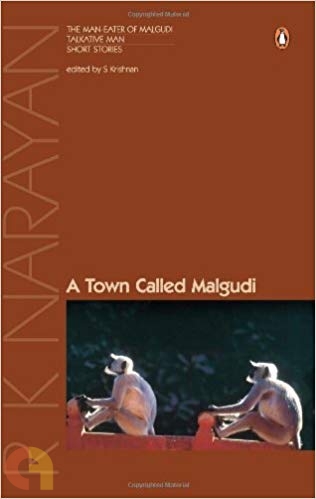 In a writing career spanning seven decades, R.K. Narayan enthralled and entertained generations of readers with his deftly etched characters, his uniquely stylized language and his wry sense of humor.

A storyteller par excellence, Narayan’s greatest achievement perhaps lies in creating and peopling the imagined landscapes of a town called Malgudi, located somewhere in South India, which has come alive in story after story in such a way that it has now become a part of modern Indian folklore. This collection brings between two covers some of the most memorable fiction that has emerged from R.K. Narayan’s pen.

It contains The Man-eater of Malgudi, which tells the story of Nataraj, owner of a small printing press, and his houseguest Vasu, a taxidermist, who moves into Nataraj’s attic with a menagerie of dead animals. There is also Talkative Man, a novella that starts off with the arrival on the Delhi train of a stranger in a blue suit who takes up residence in the station waiting room and refuses to budge. Also included here are some of the most popular and striking short stories Narayan has written: from the celebrated ‘A Horse and Two Goats’ and ‘Salt and Sawdust’ to gems like ‘An Astrologer’s Day’, ‘The Shelter’ and ‘Under the Banyan Tree’.

Encapsulating the very best of R.K. Narayan’s remarkable output, this is a fitting tribute to one of the greatest modern writers in the English language.