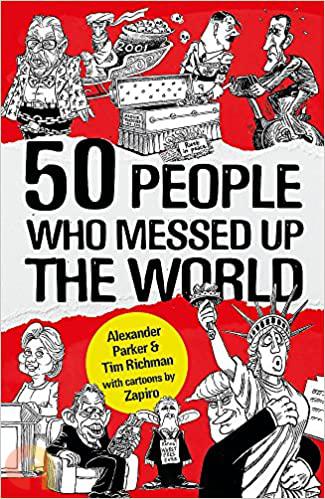 'A fantastic thought-provoking book that renews my appreciation for history. It reminds us how we got here and how we can avoid things getting worse'
Mandla Shongwe, SAFM Lifestyle

From drug lords, drug cheats and the morally corrupt to political despots and plain, old crackpots - the twentieth century certainly saw its fair share of villains. Be it through politics, war, sport, culture or just their general idiocy, these are men and women of infamy who have steered our good ship Humanity towards the World-War-fighting, smart-phone-tapping age we are mired in today.

50 People Who Messed Up the World brings together the nastiest names from the last century and beyond in one highly unpleasant yet hilarious package. Nasty names such as Stalin, Hideki Tojo and Chairman Mao make up a murderer's row of historically horrible figures, alongside more recent sordid celebs including Kim Kardashian, Justin Bieber and Lance Armstrong.

Each entry offers a sharply sardonic and scathingly thorough profile, accompanied by hilarious mono illustrations from award-winning cartoonist Zapiro. Treading the delicate balance between cynicism and optimism, Alexander Parker and Tim Richman offend and entertain in equal measure in this delightfully scornful read.