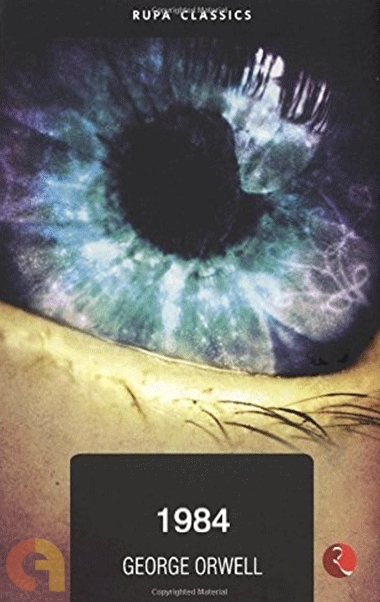 In England that has been shred to pieces by wars, civil conflict and revolutions, Winston Smith survives in a one-room apartment in the small province of Airstrip One.

In a dictatorial society where freedom of individuality is suppressed and thoughts are monitored by the Thought Police, the Party makes all the rules, guided by its leader Big Brother. Tele screens, cameras and secret microphones in every home enable the Thought Police in identifying citizens that might compromise the Party’s command.

Winston works under the Ministry of Truth as an editor and his job is to revolutionise history by rewriting records, altering photographs, managing the ‘unpersons’ and discarding original documents in a ‘memory hole’. Winston soon develops a keen interest in the real history of the world and starts writing a secret journal criticising the Party and Big Brother.

He crosses paths with Julia, who shares his contempt towards the Party, and they begin their apparently secret love affair by meeting in blue-collar neighbourhoods that do not have tele screens.

Believing that they are escaping the Thought Police’s radar, both join the Brotherhood, an underground society that intends to rage war against the Party but they are unaware that Big Brother is always watching.

With plot twists that are breath-taking this book does not shy away from questioning the modern world which explains why throughout its publication history, the book has either been banned or challenged as subversive and claimed to be ideologically corrupting.