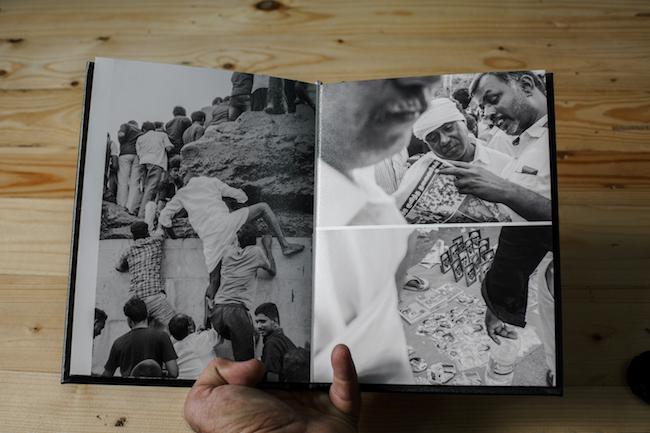 Chennai photographer’s homage to Karunanidhi: A photobook of Kalaignar's funeral

Prabhu Kalidas has come out with a photobook with a selection of 50 photographs he took on August 7 and 8, 2018, ending with Karunanidhi’s funeral.

On one balmy August afternoon two years ago, in 2018, Chennai-based photographer and writer Prabhu Kalidas stood with his camera, amid a sea of people who had gathered outside a hospital in the city. The crowds, having travelled from across the state, were waiting on news, some with tear-streaked faces and many with worried looks, about their leader. It was August 7, 2018 and at 6.40 pm that evening came the news of Kalaignar's passing, plummeting the masses into sadness over an unparalleled loss.

“I was not sure of being able to go anywhere close to his body. Therefore, I turned my camera towards people, to capture their feelings and anguish from that moment,” says Prabhu, recalling the events of the day. “In fact this isn’t new. Masters like Henri Cartier-Bresson and Homai Vyarawalla have done similar works. I felt it was important to do it for Kalaignar as well,” he adds.

Prabhu has come out with a photobook with a selection of 50 photographs he took on August 7 and 8, 2018, ending with Karunanidhi’s burial. Photographs of people holding up pocket-sized pictures of Karunanidhi, of people climbing on trees and scaling up walls to get a better view of his funeral, some sporting masks of a smiling Karunanidhi on their face are part of this book.

“Photography is a form that comes to me naturally. This is my only weapon. I wanted to use it to pay homage to him and I believe it will stand the test of time,” he says.

Prabhu further shares that his association with the Dravidian leader and his ideology goes back to his school days. Although he hasn’t had the opportunity to interact with Karunanidhi, Prabhu recalls a particularly riveting speech he witnessed about 25 years ago. “I was in my first year of college and Karunanidhi had come to Thilagar Thidal in Thanjavur for a conference. He spoke for four hours on stage and the crowds were listening to him with rapt attention. I was blown over by his presence and his speech,” says the photographer who grew up in Thanjavur.

While Prabhu never attached himself with the political party, he has for long observed it from the sidelines. “I have always been very interested in attending Dravidian meetings. When I was about 12 or 13, the rented out space in my house would be used by cultural rebel groups like Makkal Kalai Ilakkiya Kazhagam. During the nights they would hand paint posters, write poetry, etc. I’ve witnessed the police arresting them in the middle of the night and as a young boy, it piqued my curiosity and admiration for the movement,” he explains.

Continuing the memory he says, “While I come from an upper caste family myself I have detested the privilege it gave me. By following the movement and reading voraciously, I have been able to reevaluate my political stance in life. And for that to happen a giant like Kalaingar played a monumental role. He had an arresting literary style, I admired the way he took his messages to the masses. He was a revolutionary and needed to be celebrated.”

Prabhu has, in 2017, had the opportunity of working on an assignment that required him to photograph Karunanidhi’s house and office for a book published by The Hindu Tamil titled ‘Therkilirunthu Oru Sooriyan’. This work, however, feels more personal to the 44-year-old photographer, by his own admission.

“I may not have been able to write him a tribute but I thought showing it in visuals will be equally befitting. I think it is important to document a great leader’s demise. And what better way to dedicate this work than to take it to the masses?” he adds.